"This school has the potential to become an academic model for the entire state."

I had the opportunity to visit GUPS Kanathur and observe M.M.Surendran’s class along with Mathrubhumi channel’s reporter and crew. Mathrubhumi TV reporter Nishanth was really amazed to see the performance of class VI students. Nishanth said; “Sir, these boys and girls are really amazing! Look, how confident they are! They can speak English fluently and confidently. They have fairly good communication skills in conveying their ideas accurately in English. They can act, sing, dance and draw. The teacher, Surendran is with them, instilling confidence and encouraging them. Here learning English is a joyful experience”.

The idiom “Seeing is believing” is what I can say after observing Surendran’s students. M.M.Surendran challenges the “chalk and talk” strategy of English teaching and learning. One of the features of Surendran’s strategy of teaching English is active reading. He makes his students active readers of the stories in the English text book. Reading and comprehension are crucial in language learning. Comprehension becomes meaningful only when children could analyse a text, improvise it in different forms and create novel texts. As a result, the texts come alive in the English language class room. I along with the Mathrubhumi TV team really saw the children enacting the following.
Students read the part of the story in the text “Raja’s garden” in their previous class. I asked a few questions to the children about Raja’s garden. Then I asked them a tricky question; can you create Raja’s garden? Can you dramatise the scene? Instantly, the boys and girls started discussing. They decided to play different roles of Raja’s friends. Thus students started acting the roles of birds, flowers, jackals etc. By doing this the children experienced the beautiful description of Raja’s garden in the text book. The description in the text book came alive visually in the class room. One of the students described the animals, birds and plants in the garden in flawless English.
Here is another example of Surendran’s improvisation. Students have to read the lesson “Making of a Mango Pickle” an incident from the famous Bengali novel Patherpanchali. Surendran posed a challenging question: “Can you enact the scene ‘Making of a Mango Pickle’? Immediately a few students came forward. One played the role of Appu and other played Durga’s role. They played the roles and delivered meaningful dialogues. The scene became alive in the class. The class became vibrant; the story became alive in the class.
Inclusive classroom
In most of the English class rooms across the state the focus is given only for reading and writing. The less confident and low proficient learners are almost out of the learning process. Creative language class addresses the issue of less confident learners. Here, different activities are linked together considering the child's attention span. This helps even the low proficient learners participate actively in the learning process and fills their minds with confidence. Learning becomes live, engaging, enjoyable and participatory. Learning enhances learners’ confidence and communication skills.
After observing Surendran’s English class we felt, if teachers teach English this way, students will become autonomous and independent users of English. Text books will come alive in the classroom. Teachers need not have to teach the English text book, but “do” the texts in the class room. In such class rooms children listen, speak, draw, act, dance, perform and write. Learning English will not be a burden to students in such classrooms. Students become delighted and involved in the process with much concentration. They feel relaxed and calm after doing each activity.
We appreciated M.M.Surendran’s class and thanked all the students. Later the class was telecast by Mathrubhumi TV. There was also a detailed report in Mathrubhumi newspaper on “how the students of GUPS Kanathur speak English confidently”. The experience is really an eye opener. This school has the potential to become an academic model for the entire state. 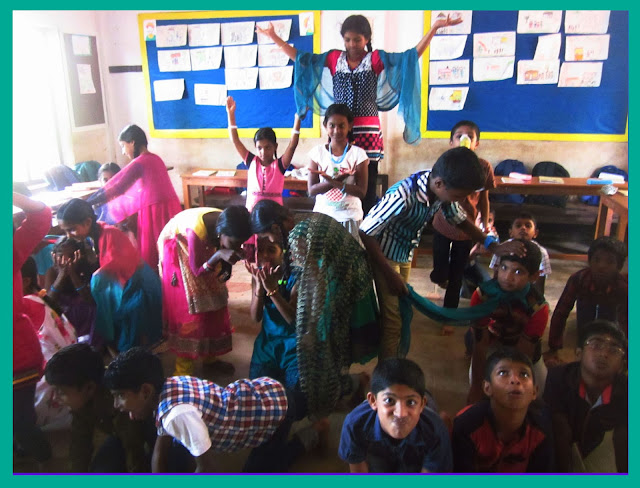 Look at this photo.

This is Raja's garden. You can see trees,birds,flowers,butterflies and honey bees in the garden. There are fishes in tanks. Birds like kingfishers and storks are also there. In the corner of the garden there is a grove. In the grove, you can see jackals,mongooses,wild cats,owls etc. Raja is in the garden,standing near the calf and saying something to it. He likes the garden very much.
Children were reading the second part of the topic 'My Home'.
Before reading the text, I asked.
“Children,do you have any friends at your home?”
Most of them have friends at home. A few children don't have.
They told me about their friends. They are their neighbour boys,girls or relatives. All evenings and holidays they play with them.
“Do you think Raja has friends?” I asked.
“Sure,sir. He is a good boy. He should have friends.” Jishna said.
“O.K. Let's see. You read the story.” 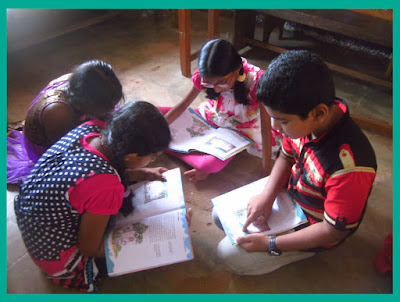 Children began  reading the text. After the first reading,Athul said.
“Sir,Raja has friends. They are not boys or girls. Birds,flowers,trees and butterflies are his friends.”
“Do you agree with Athul?” I asked the children.
“Yes,sir.”
“Why doesn't Raja have any boys or girls as friends?”
“His grandfather doesn't like other children,sir.” Gowri said.
“He doesn't like Raja  playing with other children.” Vishnu said.
Their responses made me so happy. They could comprehend the text from the first reading itself!

I asked them to mark the difficult areas or words. They marked  words  like grove,jackals,calves,reptiles,storks,shrubs,creepers etc.
They wrote those words in their note books and found out their meaning with the help of glossary and pocket dictionaries which they had brought with them. 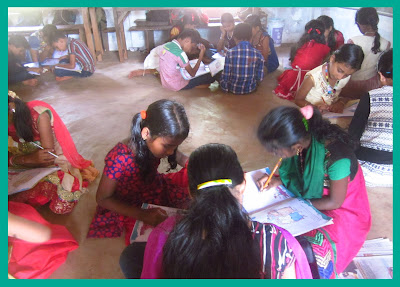 They read the passage again . Two or three children read aloud. Afterwards they sat in  groups and helped each other in reading. Then,one member form each group read aloud the text.

They opened their note books and  listed all the things found in the garden.
“Children,do you like Raja's garden?”
“Yes,sir. Very much.” Abhijith said.
“Can you create his garden here?”
“In this classroom?” They looked each other.
“No,sir. It's impossible.”
“Children, it is possible. You can do it.”
“You mean.. making garden with cut outs and chart papers?” Vishnu asked.
“No..with your body.”
“That's a good idea, sir.” Abhishek said. 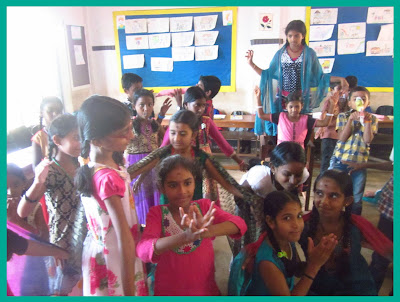 Their imagination grew wings.
I asked four children to come forward.
Two boys and two girls came.
“Children,you will lead the whole class. Now you are going to create a garden. You can give suggestions to others and place them where ever you like.” 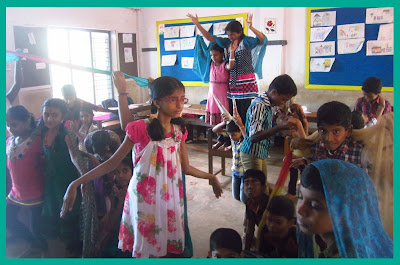 One of the boys from the group,Dhanith asked four girls to come forward and told  that all of them were  a grove.
“ Nandana, you  climb up the chair and stand like a tree.” He said.
Nandana liked it and she stood like a tree on the chair.

“Abhishek, you are a kingfisher.” Jishna,one of the girls from the group said.
He took a paper,rolled it and put it on his nose like a long beak. He went to the tree and stood near it.
In this manner, the leading group gave roles to all the children in the class and placed them just like they were a  part of the garden. The group members also became some characters and stood among them. 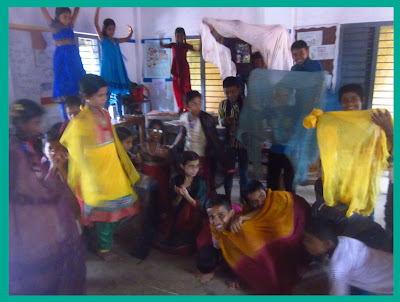 I asked them to move a little. They started moving. I played a music suitable for the situation from my mobile phone. The trees and flowers were dancing in the wind. Birds flapped their wings. Butterflies flew around the flowers. Jackals and Mongoose were walking. The calf moved a little and stood beside Raja.  Raja was  talking to the calf.
Then, I told them to 'freeze.' I stopped the music. They froze for a moment.
Again I played the music. They moved … 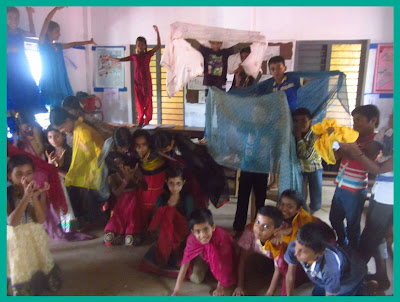 By doing this,children were experiencing the beautiful description of Rajas garden given in the story. In this description some words like grove,reptiles,shrubs,creepers etc. were new to them. They used this words while creating the garden. Thus,this activity helped them again a better understanding of the text. They were recreating the text with their body and imagination. This activity made them so happy.
Afterwards all the children sat in a circle and I said.
“Children all of you shut your eyes. Now you are in Raja's garden. You see the garden in front of you and you hear many sounds in the garden.” 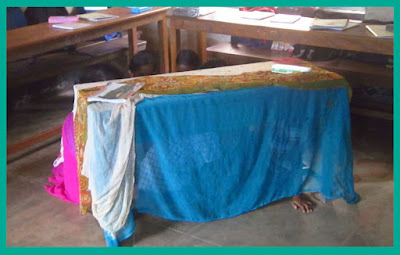 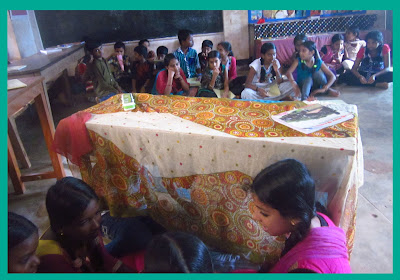 I divided them into four groups. The task of the groups was to make the sounds of the garden. They can use their own sound or create sound with any objects like stick,bottle,glass,paper,sand etc. I gave five minutes for rehearsal.
I covered the front portion of a table with a shawl. Each group could perform sitting behind the table.
They performed well. They used their hands,legs and many objects to create various sounds. One group used granite stones to make the sound of storks! Another group rolled a piece of chart paper like a megaphone and made the sound of jackals. Some others created the sound of wind with newspapers! 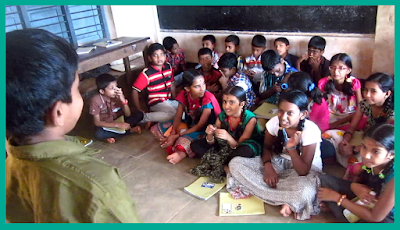 Afterwards each group assessed other group's performance and  gave feed back. 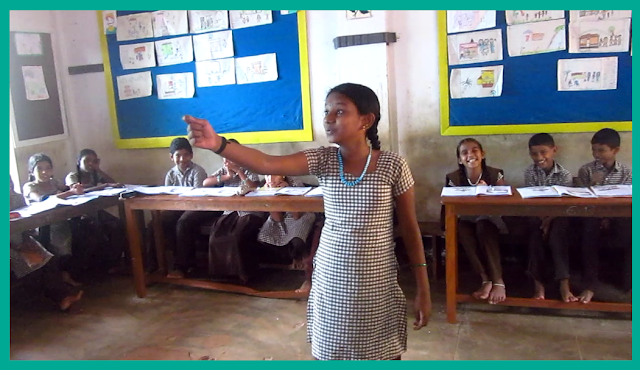 (She is plucking mangoes from a big mango tree with a long stick. she eats mangoes with pleasure. Kneeling on the floor and talking to the flower)
Hai! How are you flowers?I am going...
(Walking to a corner and talking to mongoose)
Hello,mongoose ,how are you? O.K?
Where is the rose flower?(searching for rose flower)
Where is my frog?
(talking to the frog)
Frog,please come. Where is your baby? You and your baby sitting in the house?
O.K. Bye bye my friends.(Going out of the garden) 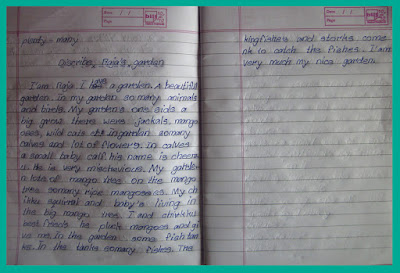 Most of the children presented well. They were turning into Raja for a short time. They talked, walked and smiled like Raja. They created their own  Raja from their experience and imagination.
Afterwards I asked them to write about Raja's garden. Some wrote   a description of the garden. Some others wrote as a monologue of Raja spending time in the garden. A few wrote as Raja talking about his garden.
Dhanith wrote like this. 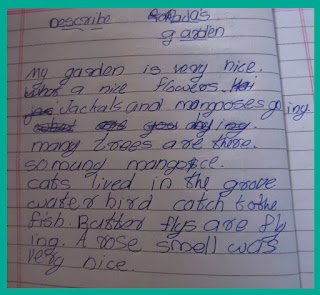 'I am Raja. I have a garden. A beautiful garden. In my garden so many animals and birds. My garden's one side a big grove. There were jackals,mongooses,wild cats etc. In garden so many calves and lot of flowers. In calves a small baby calf. His name is Cheeru. He is very mischievous. My garden lot of mango trees. On the mango trees so many ripe mangoes. My chikku squirrel and baby is living in the mango tree. I and Chikku best friends. He pluck mangoes and give me. In the garden some  fish tanks. In the tanks so many fishes. The kingfishers and storks come to the tanks to catch the  fishes. I am loving very much my nice garden.'

Email ThisBlogThis!Share to TwitterShare to FacebookShare to Pinterest
Posted by drkaladharantp at Tuesday, September 15, 2015